I was 4 years old and the family were on a ferry in the channel on the way back from Germany. I remember sitting on my Dad's shoulders watching a very small black and white television which must have been in the bar.

It was very foggy and the fog horn was sounding on the boat and I was very scared of the noise. Apparently a cargo ship carrying telegraph poles had struck another ship and was sinking. Our ferry was standing by to take any crew that may need help. Dad put me down, the fog horn sounded and I ran off scared. I bumped into one of the crew. In his pocket was a big bunch of keys and I hit my head on them and cried even more. Dad caught up with me and I was taken to the kitchen and given an ice cream to calm me down.

Most of this I remember, but on the telly was the World Cup final and the sinking ship story is what I have been told down the years.

I'm not even sure if you would have had TVs on a ship in 1966 but I do remember how small the picture was. I was not aware at the time it was the cup final and have no other recollection of this. 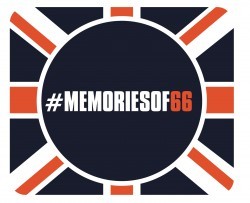