When the 1966 World Cup took place in England, I was only 12 years old. But I had some friends who were 3 to 4 years older with whom I went to local football matches at QPR, Chelsea and Fulham.

I went to the quarter final (the famous Rattin red card) and the semi-final (a spectacular double from Bobby Charlton). Unfortunately, I didn’t have a ticket for the final but my mates went. The tickets my friends held were all in the same Block – B19. Mine were elsewhere. So we devised this plan whereby after they had all gone into this section, one would come out with a “spare ticket”. He would then meet me and I would use that “spare ticket” to get into B19. Of course in those days these sections were standing not seats so it was not obvious that people might be in the wrong area. Anyway, news of our ruse got around the whole of B19 and because of the terrific atmosphere we could produce in B19, others decided to adopt the same strategy.

By the time of the semi-final B19 probably held twice as many people as any other section and made three times as much noise. The officials couldn’t work out why this was happening.

These days I appreciate that this raises a number of safety issues but at the time it was terrific fun.

I still travel to watch England play at home and abroad having been to World Cup games in Japan and Brazil. I also went to the famous 5-1 victory in Munich. But I have lost touch with my 1966 mates and go these days with my son, prospective son-in-law and wife. 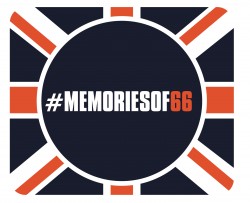