My main work was for foreign radio, using a mobile studio as a mixing point for 4 commentaries from different matches, linked from the studio. The client was RAI radio in Italy. At other times the studio was used for programmes to other countries, especially Russia and South America. There were no television feeds to South America in those days. I remember after, I think it was Brazil was knocked out there was a broadcast to South America being taken by ever station there that went on well into the night, blaming everyone except the team!!! 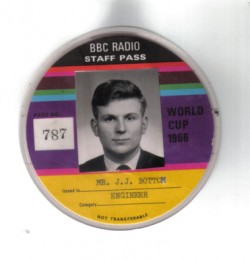